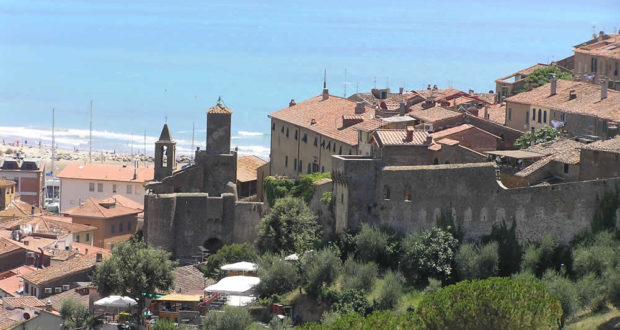 Castiglione della Pescaia, which is located just over 20 km from Grosseto, is one of the most beautiful medieval towns located along the coast of Tuscany. Coming from the north, it is advisable to exit the 4-lane Aurelia road in Follonica and from there, following the directions for Castiglione della Pescaia, continue for around 20 km along road no. 322 until reaching Castiglione. While coming from the south, instead, you must exit the Aurelia at Grosseto Sud and from here take the road n ° 322 and follow it for about 20 km. By train Turin-Rome line, Follonica or Grosseto stations, from here bus / taxi service.

The ancient medieval walled center is located on top of a hill overlooking the mouth of the Bruna river. Castiglione della Pescaia is today an important tourist center and a well-equipped seaside resort, with beautiful beaches and clean sea, repeatedly awarded by Legambiente and the Touring Club.

The historic center is very beautiful, perched on the hill of Poggio Petriccio, still today it is largely surrounded by medieval walls built by the Pisans and the Aragonese. In the historic center there are several interesting buildings such as the eighteenth-century Church of Santa Maria del Giglio, built inside a bastion of the medieval city walls. Also interesting is the sixteenth-century Church of San Giovanni Battista which has an early medieval bas-relief on the portal and has a characteristic bell tower on a circular tower. Just outside the town there is the eighteenth-century Casa Rossa access point to visit the Diaccia Botrona Nature Reserve, the last remnant of the large marshes that once covered the Maremma. Along the road that connects Castiglione with Marina di Grosseto is the interesting Pineta del Tombolo which extends for over 10 km along the coast.

WHAT TO VISIT IN CASTIGLIONE DELLA PESCAIA

In recent decades Castiglione della Pescaia has become one of the main seaside resorts on the Maremma coast, this town of about 7,500 inhabitants located along the Tyrrhenian coast in the province of Grosseto from which it is about 20 km away. For the quality of the sea and its beaches, Castiglione della Pescaia has become an important tourist destination. In recent years Legambiente and the Touring Club have elected it as the first seaside resort in Italy for its high environmental and tourist quality.

Castiglione della Pescaia is one of the most interesting places on the Grosseto coast. The area around Castiglione was colonized by the Etruscans, the remains of the Etruscan city of Vetulonia are an example. The current location arose as a small Roman town called Salebrum, some traces of which are still visible in the Paduline area.

In the Middle Ages, on the Castiglione hill, a castle was built first by the Pisans and then by the Aragonese, which still represents the symbol of Castiglione. Castiglione Castle cannot be visited, but the medieval historic center still surrounded by walls contains enchanting views and from the top of the walls you can admire spectacular views of the coast and the Maremma plain.

The visit to the Diaccia Botrona naturalistic area, which extends over what remains of the vast swamp that once covered the whole area between Castiglione and Grosseto, a remnant of the ancient Prile Lake, is also extremely interesting. The signs of the reclamation attempts made during the Lorraine government in the 18th and 19th centuries are visible in the Casa Rossa (Red House).

In the surroundings of Castiglione della Pescaia there are beautiful pine forests and wide beaches with well-known seaside resorts. Such as Riva del Sole, Roccamare, Le Rocchette and the renowned center of Punta Ala. Small historical towns are located in the interior, among the most interesting Buriano, Tirli and Vetulonia, where Etruscan and Roman remains are also visible.

Other Etruscan tombs are located in Pian di Rocca. While in the marshy area of Diaccia Botrona there is the small island Clodia. An ancient island that emerged from the dried up Lake Prile. Here are the remains of a Roman villa from the 1st century BC. C. and a Benedictine abbey built in the 11th century.

2020-03-13
Marco Ramerini
Previous: Maremma: land of swamps and tourist destination
Next: Lucca: a city of art with Renaissance walls

This post is also available in: Français Español ItalianoSituated along the road Siena-Grosseto, a few ...