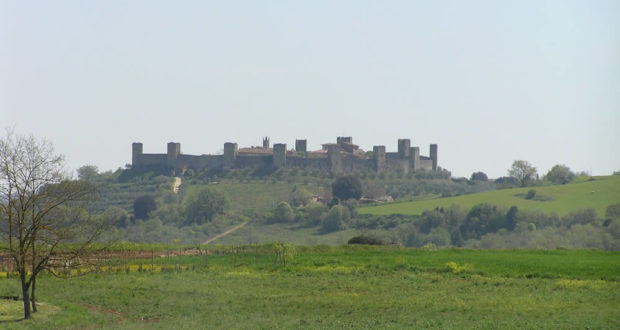 Monteriggioni is a picturesque medieval village completely encircled from circular walls with 14 towers, situated on a low hill, approximately 10 km from Siena. Until 11th century, Monteriggioni was a station of exchange along the via Francigena. Siena transformed Monteriggioni in an imposing fortress in order protect its northern border during the wars against Florence.

A FORTRESS ON THE NORTHERN BORDER OF THE SENESE REPUBLIC

Its position allowed the control of the Staggia and Elsa rivers in the direction of Florence. Its walls were constructed in the years 1213-1219 (as stated in the stone inscription on the Porta Romea) and measures 570 meters of length, 20 meters of height and has 14 square towers (more one inner tower) and two entrance gates (Porta Romea or Franca towards Siena and Porta di San Giovanni or Fiorentina towards Florence).

Because of its position, Monteriggioni often saw under its walls fights between sienesi and florentines troops. As for example in 1244 and in 1254. In 1269 after the battle of Colle, the Sienesi in escape took refuge in Monteriggioni that was besieged in vain from the Florentines. 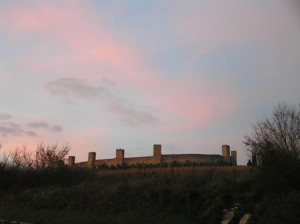 Beginning from year 1380, the inhabitants of Monteriggioni, were equal to the sienesi citizens. In 1383 a group of Sienesi exiled conquered it, with a deceit, but soon they were forced to surrender from the sienesi. In 1526 the Florentines besieged the fortress but they did not succeed to storm the fortress. Monteriggioni at last was conquered, in 1554, from the troops of Cosimo I de Medici, only as a result of the betrayal of the captain of the castle.

The main feature of this village are its walls of the 13th century, measuring 570 meters long, 20 meters high and having 14 square towers (plus one inner tower) and two gates: Porta Romea or Franca towards Siena and Porta San Giovanni or Fiorentina towards Florence. Inside of the town walls is the interesting Romanesque-gothic style Parish Church.

The whole of the town-walls of this town constitutes an excellent example of fortification of the medieval period, arrived nearly intact until our days, this splendid ancient village recalls every passed summer its glory.

In occasion of the medieval festivity, that it’s kept in the month of July, the inhabitants, wear age dresses, every sign of modernity is banished publicly, the legal currency becomes the “Scudo di Monteriggioni”.

Just 4 km from Monteriggioni on the road to Colle Val d’Elsa is the small medieval village of Abbadia a Isola with the beautiful abbey church of the eleventh century.

Video of Monteriggioni seen through the eyes of a child 8 years old. 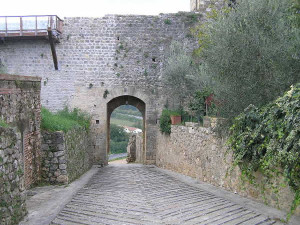 This is a picturesque medieval village completely encircled from circular walls with 14 towers, situated on a low hill, approximately 10 km from Siena and 60 km from Florence.

By Car: To get to Monteriggioni, coming from Florence, take the highway Florence-Siena (Florence-Certosa exit of the A1) towards Siena and continue on this road until you find the exit Monteriggioni.

Bus: The village is regularly served by daily buses of the SITA bus and Train that connect to Florence, Siena and Poggibonsi.

Air: The nearest airport is in Florence-Peretola Amerigo Vespucci, which is located 69 km away. The airport of Pisa Galileo Galilei is 103 km away. 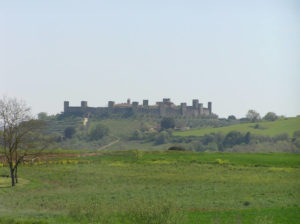 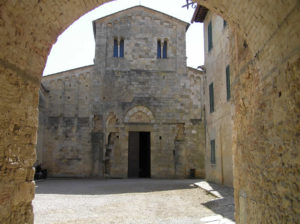 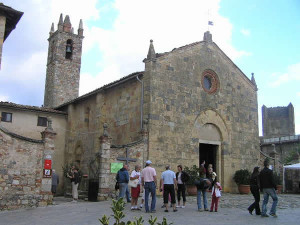 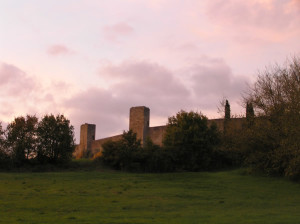 Booking.com
Marco Ramerini
Previous: Cortona: important Etruscan and medieval town
Next: Abbadia a Isola: an abbey along the Via Francigena