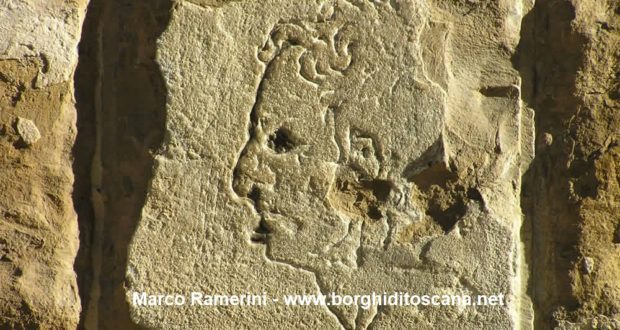 Closeup of the figure of the Importuno by Michelangelo, Palazzo Vecchio, Florence, Italy. Author and Copyright Marco Ramerini

The Importuno by Michelangelo, Palazzo Vecchio

Florence is a historic city full of legends. Among these there is a singular one concerning Michelangelo Buonnarroti. The great artist author of the David and the Pietà could have made one of his works in a stone of Palazzo Vecchio. But what is most surprising in the legend is the way in which the artist would have created the work. Read on and you will discover the legend of how Michelangelo created the work.

Behind the marble group of Ercole and Caco di Baccio Bandinelli, to the right of the entrance to Palazzo Vecchio almost on the corner of the Palazzo towards the Uffizi Gallery, you can see engraved on a stone near the base of Palazzo Vecchio, a profile of human head: the so-called “Importuno” (Nuisance).

THE LEGEND OF MICHELANGELO AND THE IMPORTUNO

The legend of the Importuno tells that Michelangelo Buonarroti, when he passed through Piazza della Signoria, was often stopped by a man who bothered him with his useless chatter. This gentleman stopped the artist every day and bothered him with endless and boring chatter.

One day while Michelangelo passed near Palazzo Vecchio he met this boring person again who annoyed him with his chatter. This time while the man was speaking, Michelangelo having with him a chisel and a mallet, holding his hands behind his back near the base of the building, while listening bored to the nuisance, he engraved his profile in a bossage.

For centuries the Florentines call this unique figure by Michelangelo “l’Importuno” (the nuisance).

This story that the image of the “Importuno” is the work of Michelangelo is probably only a legend, but the figure does exist and it’s nice to discover it in the wall of the Palazzo Vecchio. Florence also reserves of these surprises!