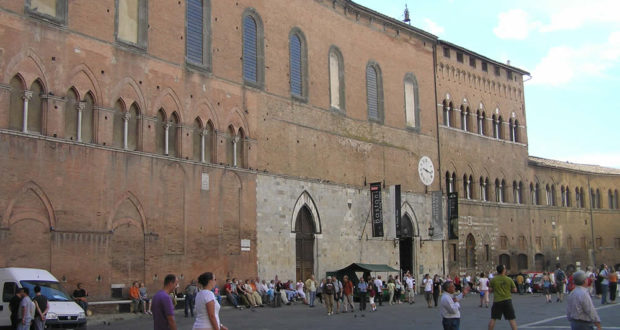 The facade of the Hospital of Santa Maria della Scala, Siena. Author and Copyright Marco Ramerini

The current museum complex of Santa Maria della Scala, was one of the first European hospitals expressly built to accommodate pilgrims traveling along the Via Francigena, and support the poor and abandoned children.

The complex is located opposite the facade of the Duomo in Siena, and its creation is due to the canons of the cathedral, who probably founded it between the 9th and 10th century, during the Middle Ages the hospital grew considerably thanks to donations and bequests from the most importat families in the city, the hospital soon became very important in the Republic of Siena economy, and its management in the first instance under the canons of the Cathedral, was later entrusted to the hospital brothers, and finally, in the fifteenth century, came under the direct control of the Commune of Siena.

AN ANCIENT HOSPITAL TODAY A MUSEUM

The hospital thanks to bequests and donations received at that time had many agricultural properties, called grancie, who were in every corner of the state of Siena as in Val d’Orcia, in Val d’Arbia (Grancia of Cuna), in the Masse, in Crete Senesi and Maremma. For almost five centuries these possessions were the source of support of the Hospital of Santa Maria della Scala, until, in the second half of the eighteenth century, was ordered the sale. 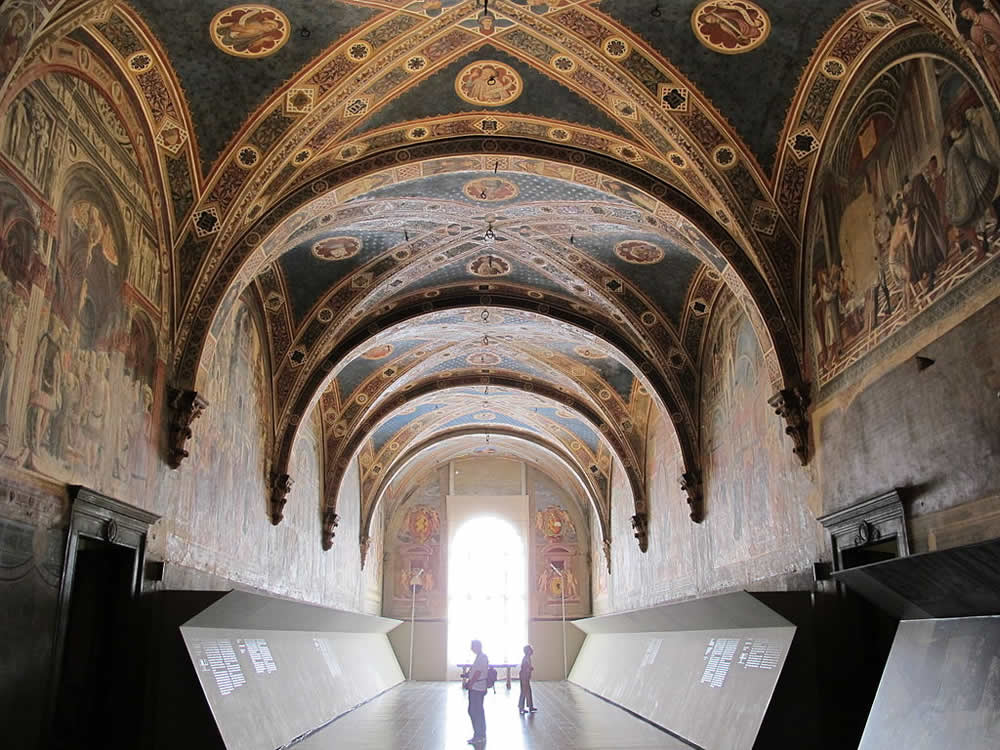 During the period of great splendor, the Hospital of Santa Maria della Scala became very important in the cultural sphere, such that today is considered the third artistic pole of the town, after the Public Palace and the cathedral. It remained in use as a hospital for citizen until a few years ago, today provides an interesting museum path, and houses among others the new archaeological museum.

Numerous great Sienese artists worked on the arrangement of the hospital. Today, environments such as the Pilgrimage bear witness to this. Where there are 15th and 16th century frescoes by Domenico di Bartolo, Lorenzo Vecchietta, Giovanni by Raffaele Navesi and Priamo della Quercia. Or like the Old Sacristy with 15th century frescoes by Lorenzo Vecchietta. But also the Church of the Santissima Annunziata with an 18th century apse painting by Sebastiano Conca. While in the Cappella del Manto there is a 16th century fresco by Domenico Beccafumi. Finally in the Chapel of the Madonna there are paintings by Giuseppe Nicola Nasini.

The current museum itinerary starts from the ticket office in front of the facade of the Cathedral and allows you to visit the monumental area of Santa Maria della Scala which overlooks the cathedral square with the church of the Santissima Annunziata, the Pilgrim with the famous fifteenth-century frescoed cycle, the Old Sacristy, the Palazzo Squarcialupi, the chapel of the Madonna and the chapel of the Manto. You then go down to the lower level (basement 1) where you visit the Corticella, which overlooks the medieval barn, where the Fonte Gaia di Jacopo della Quercia is preserved and the headquarters of two lay brotherhoods rich in works of art and more active today: the Company of disciplines under the vaults of the hospital and the Company of Santa Caterina della Notte. 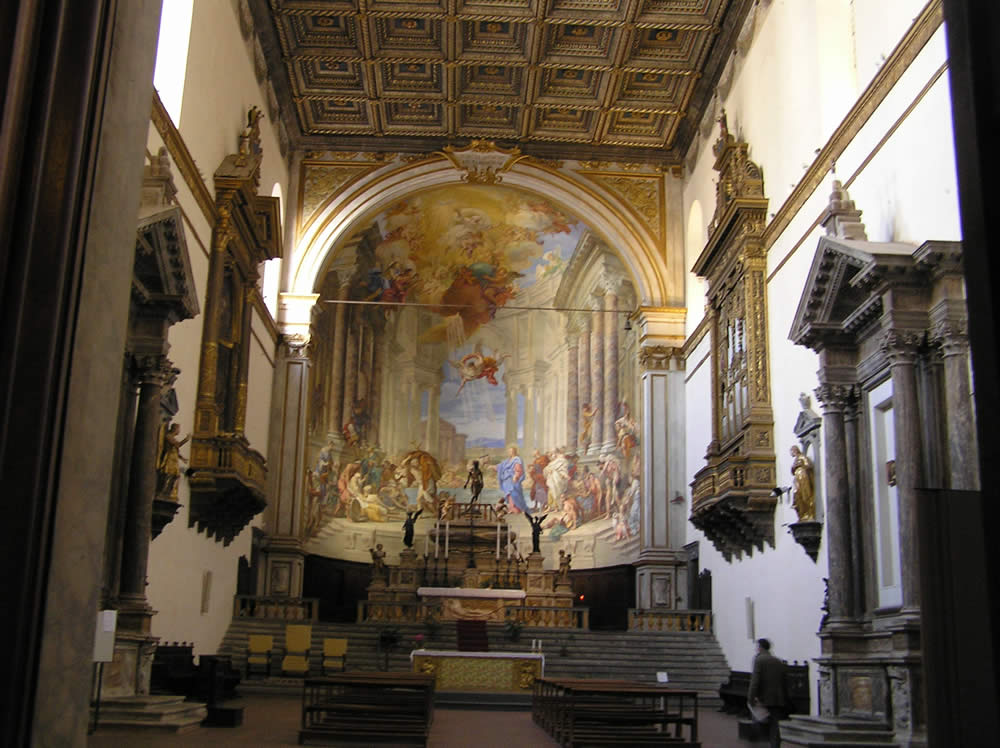 The interior of the Church of the Santissima Annunziata, Santa Maria della Scala, Siena. Author and Copyright Marco Ramerini

Through the warehouses of Corticella leads then to the so-called labyrinth (basement 2), a vast medieval sections connected by tunnels dug in tufa rocks, where are exposed the archaeological collections. The Archaeological Museum is divided into two main sections: the Antiquarian, with collections from private collections and a section devoted to the excavations and topographical discoveries occurred in Chianti, Murlo and Upper Val d’Elsa. 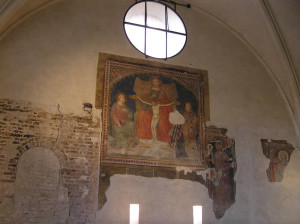 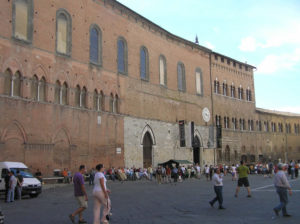 The facade of the Hospital of Santa Maria della Scala, Siena. Author and Copyright Marco Ramerini 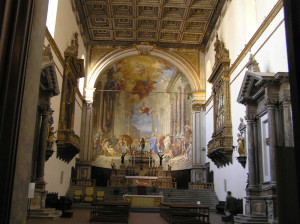 The interior of the Church of the Santissima Annunziata, Santa Maria della Scala, Siena. Author and Copyright Marco Ramerini 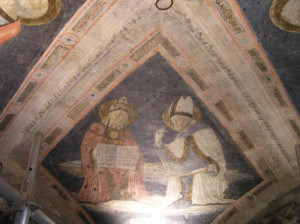 2014-12-27
Marco Ramerini
Previous: The Medici Fortress of Siena: symbol of power
Next: Prato: a city full of medieval monuments 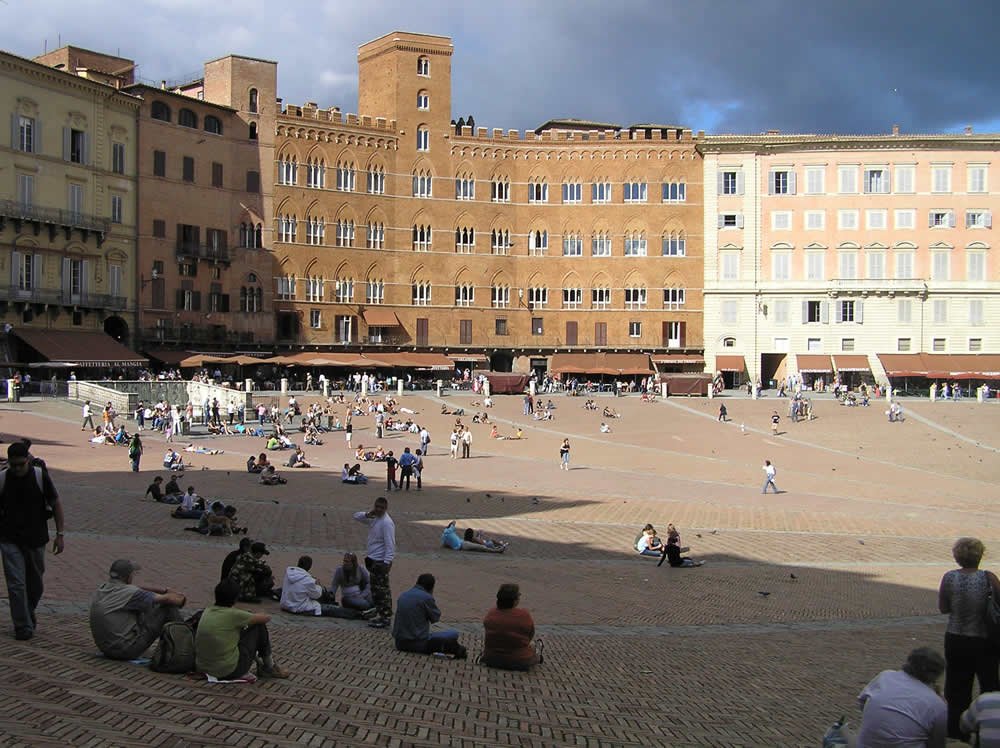 This post is also available in: Français Deutsch ItalianoIt is said Siena and you immediately think ...