Home / Cities / Chapel of the Priors in Palazzo Vecchio, Florence 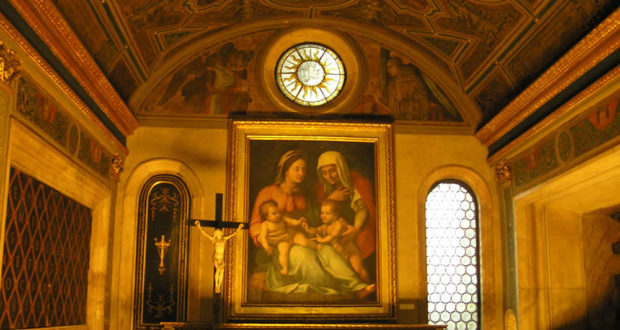 Chapel of the Priors in Palazzo Vecchio, Florence

The Cappella dei Priori (Chapel of the Priors) also called Cappella della Signoria was built between 1511 and 1514 by Baccio d’Agnolo and its decoration was entrusted to Ridolfo del Ghirlandaio (Ridolfo Bigordi said il Ghirlandaio), son of the famous Domenico Ghirlandaio. The chapel is dedicated to St. Bernard and consists of two rooms with vaulted ceilings: the altar area and the real chapel.

The walls and ceilings are decorated with frescoes with grotesque motifs on a fake mosaic golden background. In the main vault the Trinity and the four Evangelists are depicted. While in the minor vault instead the dove of the Holy Spirit and the twelve Apostles are portrayed.

On the two lunettes on the walls the Apparition of the Virgin to Saint Bernard is painted on one lunette, on the other lunette the Annunciation. This second lunette has the particularity of depicting a glimpse of the city of Florence with the Church of the Annunciation, without the portico added in the seventeenth century, and the nearby Convent of San Marco. In the chapel there is also a 16th century altarpiece depicting the Madonna and Child with Saints Giovannino and Elisabetta, the work of Fra’ Mariano da Pescia.

The Cappella dei Priori was so called because it was used by the Priori, that is, by those who ruled the city at the time of the Florentine Republic. In this chapel the Priors prayed and asked for God’s help to be fair and just in their public decisions. In the chapel were also kept the documents and objects of the Treasury of the Signoria. These documents are now kept in the Laurentian Library in Florence.

From the Cappella dei Priori you reach the Sala dell’Udienza. That is, the Chamber of Justice, used for the meetings and hearings of the Signoria.

The visit of the rooms on the second floor of the Monumental Quarters continues, now we visit the Sala dell’Udienza (Audience Hall or Audience Chamber).