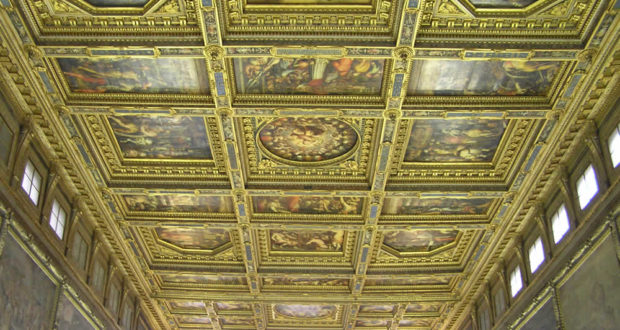 The Salone dei Cinquecento was built in 1495, during the period of restoration of the Florentine Republic. That is, after the expulsion of Piero de’ Medici in 1494. The work was done by Simone del Pollaiuolo called “il Cronaca” (1457-1508) assisted by Francesco di Domenico and Antonio da Sangallo.

The huge hall was built at the behest of Frà Girolamo Savonarola. Inside, the representatives of the Major Council (Consiglio Maggiore) were to be hosted. An organ made up of 500 members, which was the governing body of the city. This Major Council was composed of all male citizens who had turned 29 years, paid taxes and belonged to families who had held public office for the past three generations.

The realization of the Hall was completed in February 1496. Subsequently, under the government of Pier Soderini, between 1503 and 1504, the Florentine Republic felt the need to celebrate their own military victories through the realization of two immense frescoes that would have had to decorate the walls of the Hall.

It was decided of giving the assignment to Michelangelo Buonarroti to which the realization of Battaglia of Cascina was entrusted (this battles was won from the Florentine army against Pisa in 1364) and to Leonardo from Vinci to which the realization of the scene of Battaglia di Anghiari was entrusted (this was an important victory of Florence against the Milan army in 1440). 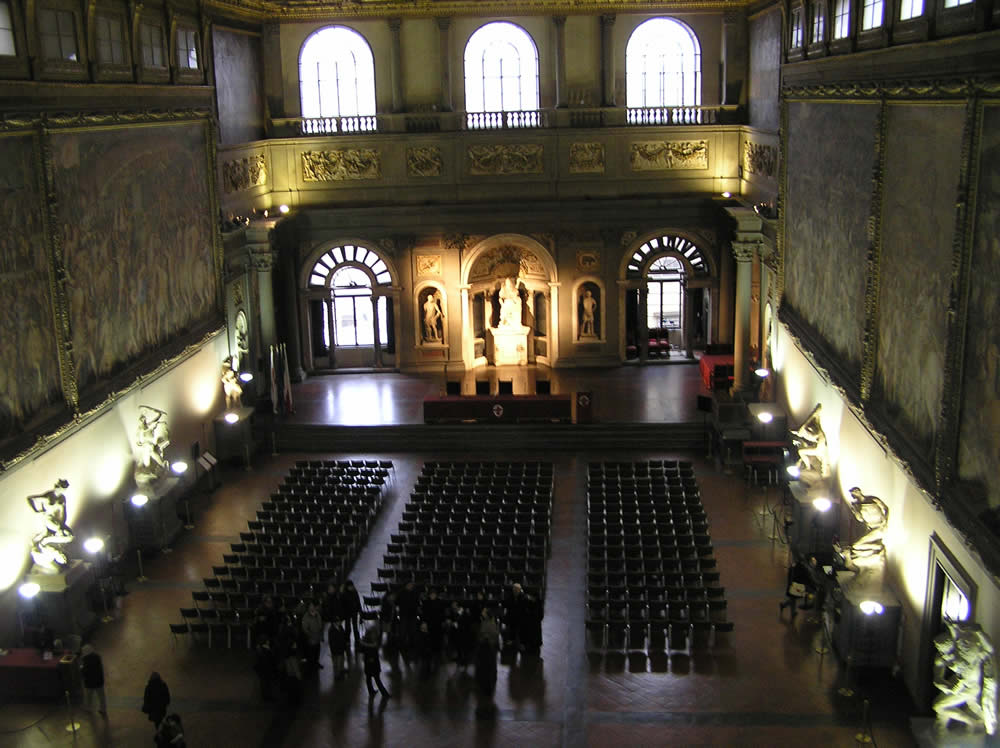 Unfortunately neither of the two geniuses of the Renaissance completed the work. Michelangelo only made a preparatory cartoon for his work. Leonardo instead painted the central scene of his immense fresco on the east wall of the Salone. His work seems to have been lost, although recent studies suggest that there is an interspace between the current fresco by Vasari and the old wall. This makes us hope that Vasari, as an intelligent person he was, did not destroy Leonardo’s fresco, but preferred to hide it to preserve it.

It will be the Vasari, in fact, in 1563 that realize the actual battles scenes, and here Vasari has left us another hope. He has written on a banner of his fresco of this wall the words “Cerca Trova” (Search and Find) which has nothing to do with the scene that he painted, but that says a lot if we think about the disappeared Leonardo’s painting.

The hall is imposing, measuring 52 meters by 23 meters. The scenes of the battles painted by Vasari represent: The conquest of Siena, the capture of Porto Ercole, the victory of Cosimo I in Marciano della Chiana, the defeat of the Pisans in San Vincenzo, the attack on Livorno by Maximilian of Austria and Pisa attacked by Florentine troops. While the ceiling, on the other hand, represents in 39 panels the most important episodes of the life of Cosimo I, the neighborhoods of the city and in the center the scene of the appointment as Grand Duke of Tuscany. Six statues are placed on the sides of the walls, including Michelangelo’s Genius of Victory. This sculpture was made by the artist between 1533 and 1534 for the tomb of Pope Julius II.

The visit continues in the Study of Francesco I de’ Medici. 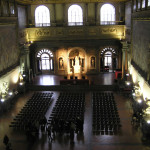 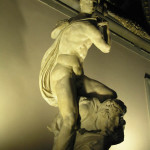 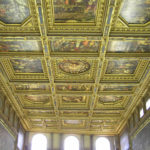 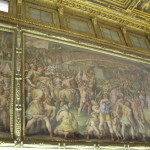 This post is also available in: Español Italiano The frescoes of the Legend of the ...