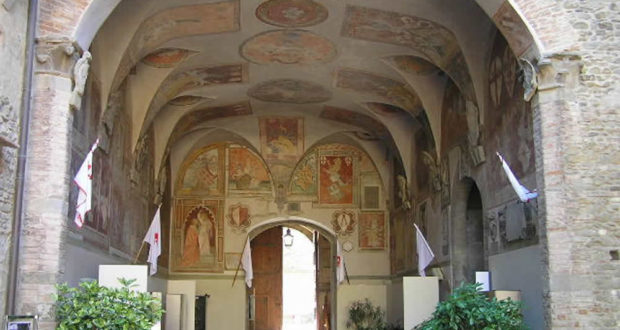 The frescoed ceiling of the entrance courtyard of the Palazzo dei Vicari, Scarperia. Author and Copyright Marco Ramerini

Scarperia was founded in 1306 by the Republic of Florence, which decided to create a military outpost to guarantee connections from Florence to the north. The design of this new fortress was entrusted to the architect Andrea Pisano, it seems that he took part only in the construction of the palace-fortress seat of the vicars.

The castle became the most important in north-eastern Tuscany. In 1415, Scarperia became the seat of the vicariate and seat of the administrative offices that controlled a vast territory, which extended over the whole Mugello.

Today the town is known for its knives and for being the home of the Mugello Circuit (Autodromo del Mugello), where Moto GP races are held and where Ferrari tests its Formula 1 cars.

PALACE OF THE VICARS

The Palazzo dei Vicari is the building that characterizes the whole of Scarperia, its facade, the one facing the main town square, is a classic and austere residence, while it has the shape of a fortress on the back.

The complex of the Palace is formed at the base by inclined walls and by a high tower that comes out from the right corner of the facade. Its facade is also adorned with an incredible number of coats of arms of the Florentine vicars, in stone and majolica.

The internal courtyard is characterized by frescoes from the 14th and 15th centuries, which contrast with the severe appearance of the external facade. The palace is accessed by a staircase which on the landing features a beautiful 15th century fresco depicting San Cristoforo.

In the same square where the Palazzo dei Vicari is located, there is the Prepositural Church with a cloister from the 15th century and the Oratory of the Madonna di Piazza with frescoes and a Madonna and Child (14th century) by Jacopo di Casentino.

HOW TO GET TO SCARPERIA

Car: Scarperia is located in Mugello, 32 km north of Florence, to reach it from both north and south the easiest way is via the A1 Autostrada del Sole exit Barberino del Mugello, from here follow the signs for Borgo San Lorenzo for about 10 km then in the vicinity of San Piero a Sieve take the crossroads for Scarperia, about 16 km from the exit of the highway.

The shortest way for those arriving from Florence is via Bolognese, which passes through Trespiano, Pratolino, Vaglia until reaching San Piero a Sieve and then Scarperia.

Bus: Scarperia is regularly served by numerous daily trips of the SITA and Autolinee Toscane buses.

Train: The railway stations of San Piero a Sieve (4 km) and Borgo San Lorenzo (9 km) are the closest to Scarperia. The old and fascinating railway track of the “Faentina” allows access to the Mugello and therefore also to Scarperia both from the Romagna side starting from Faenza, and from Tuscany starting from Florence. Another line from Florence passes from Pontassieve to then arrive in Vicchio and Borgo San Lorenzo. Some local public transport lines then connect the stations to Scarperia.

By Plane: The nearest airport is Florence-Peretola Amerigo Vespucci, which is 44 km away. Bologna Airport is 85 km away.

2020-03-13
Marco Ramerini
Previous: Pistoia: a city with a valuable medieval center
Next: Badia a Passignano: a fortified abbey

This post is also available in: ItalianoRadicondoli is a small medieval village which has about ...