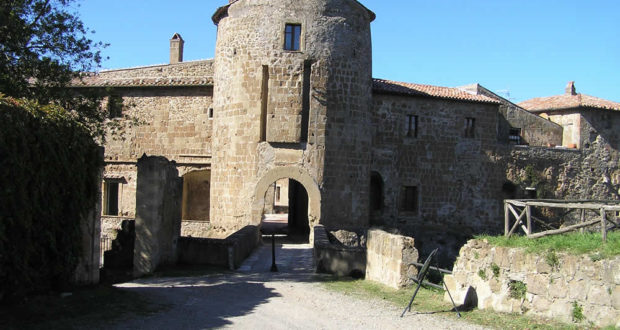 The round tower in which traces of the disappeared drawbridge are still visible. Rocca degli Orsini, Sorano, Grosseto. Author and Copyright Marco Ramerini

Sorano is located a short distance from Pitigliano and Sovana, in the extreme south of Tuscany in the area known as “the Tufi area”.

Sorano is a beautiful medieval village located along the valley of the Lente river, in a highly suggestive landscape, where dozens of tufaceous spurs with various and bizarre shapes are scattered.

THE FORTRESS OF ORSINI

The town is dominated by the Rocca degli Orsini, of fourteenth-century origin but completely restored in 1552, while in the center of the ancient village is the Sasso Leopoldino, a rock fortified in the eighteenth century with the construction of a very high wall and a bastion of shape square.

It is better to park your car in the Fortress area, from here visit the fortress and the museum, then with a beautiful paved road you will reach the heart of the historic center where the Sasso Leopoldino is located. From here you cross the old ghetto full of characteristic alleys, arches, stairs, loggias, cellars dug into the tuff. Then you exit the village along the Porta dei Merli, and you reach the Lente river, beyond which numerous hollow roads begin.

The Via di S. Rocco goes up on the other side, beside the ruins of the church of the same name (reachable also from the road to Sovana), behind which extends a vast necropolis with chamber tombs and from where you have a beautiful panorama of the town and on the Rocca degli Orsini above.

Sorano is dominated by the Rocca degli Orsini, of 14th century origin but completely restored in 1552, the Rocca is one of the most remarkable military architecture executions of the Italian Renaissance.

The architect who renovated it in 1552 was Anton Maria Lari, he built a ramparts to protect the fortress, inside which there were two courtyards protected by moats.

Inside the Rocca there is the Museum of the Middle Ages and the Renaissance, with illuminated manuscripts, frescoes and other archaeological finds, it is possible to visit the ancient medieval walkways and the keep.

2020-03-13
Marco Ramerini
Previous: Vetulonia: one of the most important Etruscan cities
Next: Maremma: land of swamps and tourist destination

This post is also available in: ItalianoRadicondoli is a small medieval village which has about ...